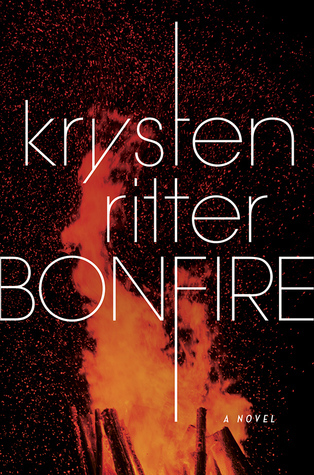 Abby Williams hasn’t been back to her tiny hometown since she graduated high school ten years ago. But when her Chicago law firm sends her back to Barrens, Indiana to work on an environmental case that involves the town’s biggest employer, she finds herself drawn back into a mystery that has haunted her since she left: the disappearance of her childhood best friend, Kaycee. Is there a connection to the case she’s working now? Is it part of a larger conspiracy? Obsessed with finding answers, Abby doesn’t realize that the town’s mysteries might consume her, too.

This unputdownable thriller from Ritter, best known as an actress, was one of the best reads of 2017. Fast-paced, brilliantly written, and featuring a compelling and fascinating narrator, this is a knockout of a novel, guaranteed to keep readers breathless until the last page is turned. While it doesn’t reinvent the wheel as far as mystery/suspense novels go, it does provide a really unique take on the genre, with very satisfying results.

Abby is a compelling narrator, clearly smart but also clearly broken. Much of that is related to her upbringing in the desolate town of Barrens, Indiana, a setting that becomes as much of a character as anyone else in the novel. She’s an extremely well drawn character, and feels very real. She also makes a ton of mistakes, but they all make sense in the context of what’s happening.

Gripping, suspenseful, and unrelentingly dark. This would make a great movie but stands alone as a great piece of fiction. Put this in the hands of readers who like their mysteries complex and their heroines complicated. Absolutely fantastic. I will read whatever Ritter does next.

View all posts by Clementine Bojangles

I am currently accepting books for review. Please read my review policy on my About page for more information. If you are an author or a publisher, please email me at: clementinebojangles [at] gmail [dot] com.